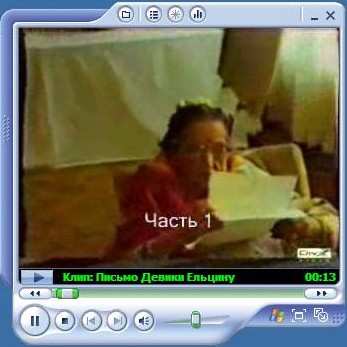 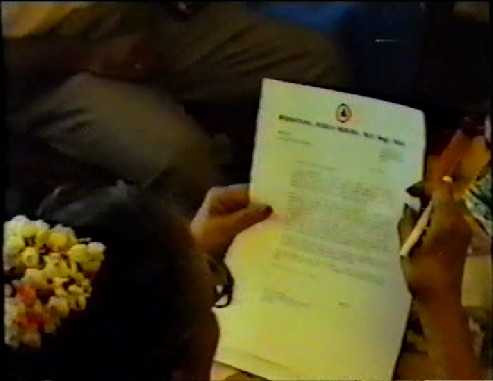 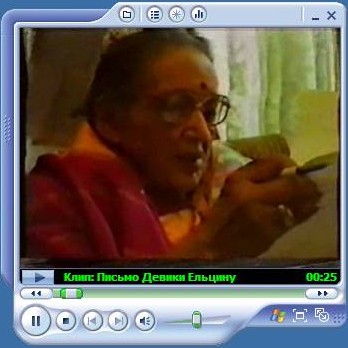 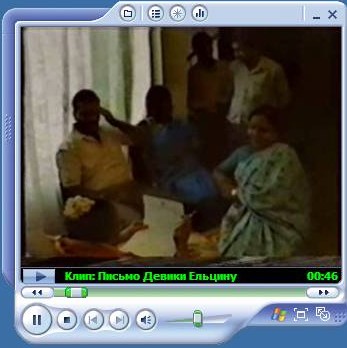 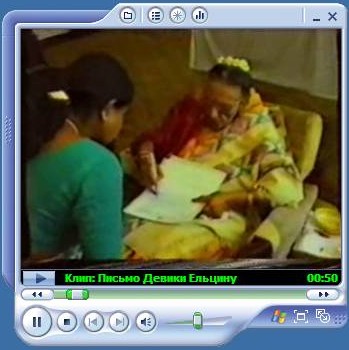 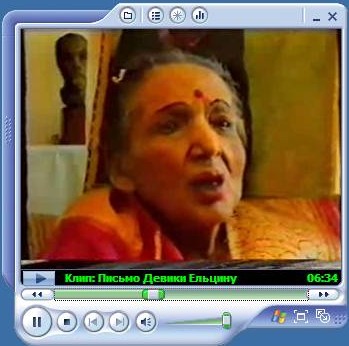 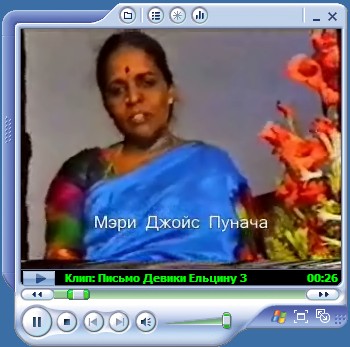 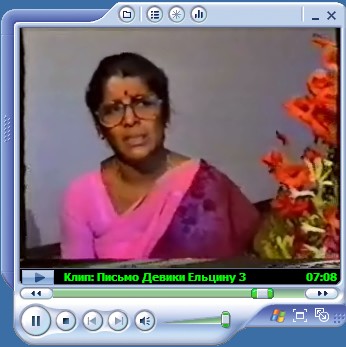 My dear Russian friends, you know very well that I love Russia and always have ever since I was a small girl. So it is a privilege to talk to you today after such a long time. Svetoslav and I have been married for several years and we got married here in India because he loved India and we both loved being here. Of course I had many occasions to visit your country, your beautiful country, rich in every way, in art, beauty, music and everything. And it’s beautiful. You can not imagine how much it means to me <?????> to me to talk to you today <?????????????????> I am completely alone. The loss of Svetoslav to me has been tremendous. I never had such a wonderful companion and friend. We both worked together, talked together and saw the world together. <?????????> except China and Japan I think I visited most <??????> of the world. <???????> but I always came back to Russia because I love it so well, especially to Leningrad, which was his home where he was born.

He was such a good-looking baby and such a wonderful-looking man, kind, considerate in every way, and we enjoyed life together. We visited museums and <???> so many <???> all over your country, your beautiful country. We remember so well your museums, Tretyakov Gallery in particular when it has been rebuilt and Svetoslav's (?) exhibition has been shown. It was a <???> wonderful <???> exhibition <???> Svetoslav’s, <????> paintings, small and big. And it was crowded, it was just packed full. <???> And we enjoyed the cold, the winter. We... we are not unused to the cold, because, you see, our home in <????>, Kullu, was particularly beautiful. And I often thought, how happy all of you would have been to be in Kullu. Kullu was the home of his people, his mother and father and no one of us lived there. And the most beautiful scenery <???> Himalayas... snow on the mountains and flowers... the spring. <?????> became our home, my home. I was treated there as a daughter <????> Madam Roerich, Professor Roerich, George Roerich, his brother. And of course Svetoslav too was apart of being my husband was a really good friend.

He would love to see the Himalayas. He had daffodils to daffodils, crocuses, violets. All kinds of flowers by excess fill the valley Kullu. Of the most beautiful thing fruit in abundance: pears and apples, cherries, he had the most marvelous cherries. <????????????> And we loved them. There was nothing that was wanted. But the best of all, really, was my home coming. When I reached Kullu I went on <????>. And then there was a <?????????> waiting for me. We saw all of pujarees of the different temples playing wonderful music of those <???>. And then I was put on a horse. And then we went right up slowly to what was known and is known as a temple, wonderful temple for the gods. The old, old temple it’s existed thousand of years ago. There is a small little temple there, where we all used to pay our respects to the gods. And they put a rupee or two rupees there for the pujarees, the priests of the temple. And we’d walk up to the beautiful scenery which faced the Keypan Paws (?) Mountains. Keypan (?) is a fascinating mountain full of snow. <???????> And there was nothing that we <???> wanted to see <????> this wonderful mountain, full of snow. All the mountains were full of <???> the range.

You can not imagine, my friends, what it meant to me when up to his house, to the Roerichs’ house. Professor Roerich, Madam Roerich, George. <????> George was a brother and he was a Sanskrit scholar. He wrote a dictionary in Tibetan, Mongolian, English and some other languages which is published in one volume. There we went, right on top of the hill facing <????> range. There Madam Roerich and Professor Roerich welcomed me. And the small girls (?) ran and hide and then <???> . But they welcomed me as a daughter of the house. They were very lovely, these people. <???> not treated otherwise. Svetoslav arranged our room downstairs. He got all the furniture from the hall, beautiful furniture, made there. And it was carried over there to what was known as my room. I can’t tell you the peace and beauty I felt there. From my window I could see the beautiful range, other mountains, especially the Keypan Paws (?). Of course I never went to Keypan Paws (?), because it was too far away. But still it was part of my whole life there. There was nothing right there <???> of the world, nothing so magnificent, and the people there are so magnificent. They have their own music, and they have their trumpets, and they have their local dances, which are fascinatingly beautiful. And everyway have, you know, as Kullu, three hundred and sixty five temples, and all these temples participating in my welcome home. Up we went, right up, to the house of the Roerichs. And where I was welcomed as part of the family. Every bit of that home belongs to me, <????> belong to me, I think, from my childhood <???>.

In the morning <?????>, all looking the mountains. The windows will be opened, large windows <???>, large windows. <?????> It was so beautiful, and the only thing <????> I tell you much about, the mountains. But I want to tell you, that India is so beautiful and so rich in its forestry (?) , and the people are so nice, so gay and lovely (?), from the north to the south. And I see the Volga as the great river of Russia. And I look at the Ganges, Ganga. I hope one day or always (?), that these two great rivers go (?) like brothers right to the end of time facing life as it was and is, and nothing can break the continuity of friendship between our countries, Russia and India. And whether we live in the south or the north makes little difference.

Here I am talking to you in the south, Bangalore, and the people are lovely, kind, intelligent, beautiful. We have also here <????> kinds of <???> and we have met so many Russians here. The Russians that we met were nice. But we were treated very badly towards the end of our stay when Svetoslav died. They thought that we have no place in their country. And we belonged only to Russia. Even when he died the behavior of these people was so bad. It was impossible to describe or even think.

[16:12/26:45 Devika Rani Roerich]: ...few others. They demanded all sorts of things from us. Even when Svetoslav was dead, thinking that was their right to possess all that he had. That was the most unkind, ambitious and <??????>. I just has lost my husband. I stood there down <???>, looking at them, wondering how they could be so cruel. <????????????> in my husband’s. He was just... dead. And they wanted to from him different things, little things that belonged to him, about which I knew little. Kadakin threatened my secretary Miss Mary Joyce Punacha that he would burn her if she refuse to hand over the body to Svetoslav... of Svetoslav’s.

[17:56/26:45 Devika Rani Roerich]: ...that his coffin would go to Russia <????> would bring my coffin back to India, where I would be dead and come back dead to my own country. All sorts of cruel <???> things, which could <???> how do you manage that people who had a position in their country... [phone rings] ...could behave like that thinking that they would bring my coffin back and they leave his in Russia. He was not dead. How he died I don’t know. But that was their idea that they would send my coffin back to India and his coffin should be in Russia. The horror of civilization can not be imagined and <???> believed, they <???> not believed... at all... that civilized people could think of those who helps (?). Of course, I will always be Indian, he will be Russian, dead, going to be received by them and service would be in his name, because he is an Orthodox Russian belonging to the Orthodox Church... [snip in the record]

[20:29/26:45 Devika Rani Roerich]: ...organized the funeral so beautifully in my estate. And all the villagers welcomed him, <???> received by him. We have now got his grave in the estate.

[21:07/26:45 Devika Rani Roerich]: And everybody comes to visit him from far <???>, visit his Samadhi. He can not be dead really, because his spirit is there. His spirit is all over India, he loved India, he can not leave India. That’s why I wish, my dear friends, to tell you that I love Russia also, without the cruelty of these people who surrounded us when my husband died. They wanted his body to be taken.

[22:03/26:45 Devika Rani Roerich]: ...Russia, but the way it was taken is so cruel. And thank God, it was not so. His body remained in India, proud and beautiful. He came from a very old family, and the Russians love him, all Russians love him. We never thought that we’d be separated until death came. I am alone now, far from Svetoslav, or maybe his spirit is here. We believe that. And we hope with Mary to build several temples, several academies of art and culture all over India in his name, also in the West, in Paris, London, New York, where they have the Roerich Museum. And several of the paintings are exhibited. It is impossible to think of the Roerich Museum without the art of the Roerich’s being there.

So, my friends, I wish you good luck. And I’m happy to tell you that my feelings to Russia are just as good and fresh as ever were. And my wish is that <?????> the Ganges and the Volga run together through eternity, ever fresh, ever beautiful. These are my greetings to you, my dear friends. God bless you all, bless you always, bless you and your country. <???> I hope that He will bless you again. And let us hope these two rivers will flow to inter... eternity for ever and ever. That’s all I got to say to you, and I hope that we shall be all together more and more each year.

Mary, my secretary, she is my companion now; she will see to it, she looks after me with so much love and care. And we both wish you all love, friendship, understanding, and friendship that Lord (?) only knows. Bless you always, bless our rivers, bless our lands. Nothing unhappy should happen, only good. <???> Jesus Christ <????????>.